Seeing Pairing Collections: Contemporary Art in 1980s Arkansas is like listening to 94.5 FM and hearing a song.-something like 1983's "She Was Hot" by the Rolling Stones or 1980's "Skateaway" by Dire Straits-that instantly transports you to decades past. And makes you happy.

The Mitchell Williams collection started in 1967 when Maurice Mitchell-one of the law firm's original partners who believed in supporting organizations that provide charitable, social, educational and cultural enrichment to the community-and his colleague, attorney Chris Barrier, decided to build a corporate art collection, for which Barrier was responsible for selecting and purchasing art, concentrating on Arkansas artists. Its 92 pieces hang in offices, entrances, hallways and meeting rooms at the firm's Little Rock headquarters.

I'm especially pleased to see that Bailin, one of my favorite Arkansas artists, is represented here.

The stark, somber beauty of Bail in's style is easy to recognize. He has described his drawings as "a cross be tween Keaton and Kafka. My characters are almost always a Buster Keaton character living a Kafka short story. Stoic, even heroic at times, but absurd and, from the reader/viewer's stand point, humorous just the same."

Working primarily in drawings for much of his 40-plus years as an artist, Bailin took his first art class at a visual art center in Sioux Falls, S.D., when he was 6 and progressed into an adult painting class when he was 8. After earning a BFA at the Univer sity of Colorado, Boulder and an MA from Hunter College in New York, he received fellowship awards from the National Endowment of the Arts and the NEA/Mid-American Arts Alliance as well as the Arkansas Arts Council.

He came to Little Rock in 1986 when his wife, attorney Amy Stewart, accepted a clerk's position with U.S. District Judge G. Thomas Eisele and he took on the role of director of the Museum School at the Arkansas Arts Center. In 1996 he became a lecturer at the University of Arkansas at Little Rock and the University of Central Arkansas in Conway.

I'm not familiar with Bailin's out put from the 1980s, having been introduced to his creativity at a solo exhibition of giant 8-by-12-foot drawings in 2000 at the Arkansas Arts Center and subsequent AAC Delta Exhibitions (he won its Grand Award in 2014).

What most impressed me, though, was seeing his small drawings on the walls of Koplin Del Rio Gallery in 2004 in West Hollywood when I was in Los Angeles for a film junket.

The chic gallery, which has since moved to Seattle, focuses on representational figurative, landscape and still-life works created primarily by West Coast artists. This was Bailin's second exhibition there; the first was in November 2002.

"They got interested when, on the recommendation of [AAC director] Townsend Wolfe, I sent [gallery director] Eleana Del Rio : catalog from my 2000 [Arkansas] Arts Center show," he said in an interview with me in 2004. "She contacted me soon after, but I wasn't interested in their gallery since I wasn't willing to commit to creating small works; I was working on 8-feet-by-12to 15-feet drawings at the time.

"This response, in hindsight, still sends chills down my spine for its pure arrogance," he said.

Luckily, he continued, "in 2001 Ms. Del Rio came to the Arts Center on business, and she asked if Wolfe could arrange for her to meet with me. That meeting resulted in my participation in a group show [in California) in June 2002 and then a one-person show in November 2002."

His presence in both shows was predicated upon reducing his drawing size. "We fell in love with his stuff and told him if he ever decided to work smaller to let us know," Del Rio said.

"I spent the intervening time trying to rethink my work," Bailin said. "Los ing my basement studio, with nearly a half a city square block of space, in the Woman's City Club and moving into my two-car garage encouraged the change in scale. It took me six months to find the technique."

Most of the 12 charcoal-on-paper drawings in the Koplin Del Rio exhibit were 26 by 30 inches in size–gaunt scenes of blasted landscapes with bony trees, many with solitary figures noodling about in pursuit of private quests.

The gallery continues to represent Bailin.

It will be exhilarating for long-time fans to see an example of what Bailin produced in the decade when he first called Arkansas home. "That will be an interesting exhibition,' Bailin told me recently. "I don't know if I am looking forward to seeing that work or dreading it."

Best time to visit Pairing Collections: During an opening reception from 5-7 p.m. Thursday, Aug. 22. There will be snacks and wine, along with good company and a vibrant display of artistic achievement. 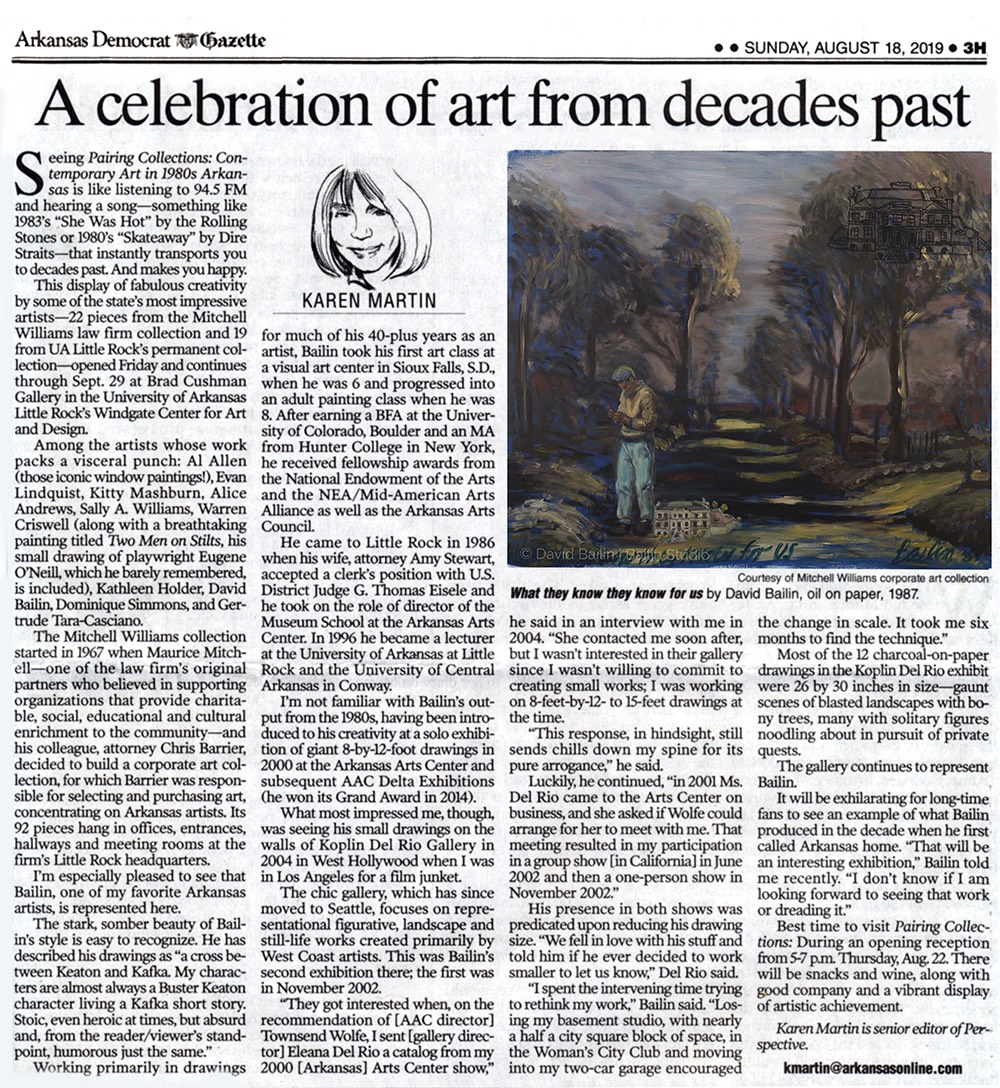