Abstract art has been a viable form of visual creation for over a hundred years. Its meanings and manifestations have multiplied over those years, resisting or avoiding the whims of fashion to provide artists an increasingly vast range of language and meaning. Why, then, do we worry about or, alternatively, glibly dismiss the survival of abstract art? Is abstraction dead? Is it die-able? Does abstract art need to be defended at this point, or simply re-averred? And in either case, by whom?

A group of artists from around the country, brought together by their common dedication to the practice of image and composition-based abstraction (in this case entirely within two dimensional media), defines itself not by what its members do or why they do it, but what factors maintain their commonality and how they feel they struggle or do not need to struggle to participate in what has become a global discourse in art. In their case they argue not for a political stance or identity, but for a region of thought and action in artmaking itself. And they argue on behalf of many more artists besides themselves. As opposed to the manifesto-wielding aesthetic ideologues of old, the artists here do not stand opposed to methods removed from theirs; they stand opposed instead to discursive and (especially) commercial factors that diminish the practical and metaphysical substance of what they and their peers do. This group has formed in reaction not to other art forms but to the art world itself. This is an attempt to re-valorize the ineffable in art abstract art in particular, as abstraction is nothing if not the manifestation of the ineffable.

Yet, what is abstract art? When we use the term "abstraction," does it really mean all we think it means? How much an umbrella term is it? A voice speaking on behalf of abstraction early in its second century must speak at once in concrete and in existential terms. "Concrete," indeed; since the 1960s, a kind of "abstraction" that is anything but has presented itself as a viable alternative to both representation (or, if you would, illusion) and "traditional" abstraction that alludes to the conditions of the seen world without recapitulating them. Concrete art, proposed by some of the originators and most radical practitioners of abstraction in the early 20th century, became an entity unto itself with Minimalism, Arte Povera, and other formulations that emphasized presence and material over form and image. The process of transformation, central to the modern notion of artistic practice, was no longer simply determined by the artist but was shared with nature and based in philosophical proposition abstraction brought to its vanishing point. This provided traditional, more optically-based abstraction its first existential crisis. But the thingness of minimalism (and the anti thingness of conceptualism), despite the radical assertions of its champions, failed to obviate established pictorial abstraction, even as it demonstrated that such pictorial abstraction has more in common with traditional figuration than it does with such concept-forward art. Thing-art even helped widen the scope of abstract image-art, by among other things proposing the viability of the one-color canvas.

What needs to be proposed or re-proposed now is the viability of composed or pictorial abstraction as a method of picture-making (or at least image-generating) beyond the context of illustration or external depiction. All such pictorial abstraction (again distinguished from the 'concretion" of minimal art et. al.) necessarily alludes to the "outside" world, even as its most fervent and certainly its initial practitioners may attribute their non-objective formal language (s) to a world unseen, that is, an inner spiritual world. In fact, that spiritual world lies as much "outside" the context of abstraction as does the real world that is to say, not at all. All art is a manifestation of its makers' perception, after all; some artists turn to nature, others to the everyday, and still others to "mystic truths" as the spark and substance of their adventures in pictorial abstraction. But those adventures are necessarily sourced in some external factor. Indeed, it is this very "dependency on the world" that concrete art sought to leave behind in search of an autonomous, self-fueling inner combustion. But no one, finally, can turn off our brains' thirst for simile or compulsion to pattern recognition. f what we see is what we see, as thing-art is supposed to insist, we see things that aren't present, things suggested to us by even the most featureless and obdurate objects.

Does it boil down, then, to the fact that abstract artists can't tell their audience what to see? And if so, who is truly "in charge" of abstraction, its makers or its beholders? Given the fact that abstract art has had a good six generations of witnesses and that there is no longer serious resistance to its meaning or display, we can say that abstract artists now at least can argue for the self-sustenance of a non-objective practice and not be overridden by those who expect to freight the non-objective artwork with external reference. Admittedly, the presence, and certainly the significance, of such reference can't be wholly ceded to the maker of the art; we viewers and commentators still readily find trees and buildings and clothing and faces where none was meant, as if we all suffer from pareidolia. But artists have at least been granted full authority over the principle of abstraction.

If it resembles something, it can also resemble itself and, accordingly, if it seems to mean something, its meaning lies not in what is seen, but in the full range of the seeing experience.

Finally, the durability of an idea or practice and abstract art is both depends not on the viability of the arguments made on its behalf, or on its success dictating its own terms of reception, so much as on the vitality of its application to actual practice. Theory does not validate something like visual abstraction, it simply frames it and adds profundity to the context of its exercise and, especially, its comprehension. Abstract art endures because artists still make it still devote their lives to it, still investigate its problems and possibilities, still answer to the challenges posed by other artists, contemporaries and predecessors alike, and still establish visual vocabularies based on elements at once laid bare and intricately combined. Abstraction lives on the assertion of individual artistic personality, and on variety amongst those personalities.

In effect, abstraction is not a position so much as an available form or many available forms, as even the variety evident among these seven artists makes clear. In late postmodernism, when the co-existence (and even co-function) of disparate methods no longer presents itself as an "issue" but is simply an accepted condition, one chooses to subordinate one's method to a given vocabulary or, more often, one concocts one's method from the vocabularies available, at least those which seem personally urgent and viable.

That is to say, there are stylistic aspects that tie various of these seven artists to one another, but none that binds them all, much less binds them equally. This is the unspoken position of this group: it is a network of affinities elected out of common interests revolving around the base factor of abstraction that suit the group's members to greater and lesser extents. As explained, the group takes its position vis a vis the art world; in terms of actual practice, the individual members stake out their own concerns, and thus their own identities.

David Bailin, too, exercises a baroque sensibility only in his case the volume of visual sensation reaches well outside the perimeters of the non objective. Bailin, who is known for his figure based narratives, would seem an odd man out among those advocating for abstraction. But his enthusiastic participation in this rhetorical defense of the abstract indicates that Bailin's narrative has become more diffused and abstracted, and his style has modified to convey this adequately. His welter of faces, figures, and other recognizable imagery has become at once thicker and more indistinct than ever, the interplay of pentimenti of fading memories and ghostly presences a conceit that embodies the increasing confusion Bailin's father suffered as he slid towards death (which the artist documents in the series "The Erasing").

On the face of it, relying on a process of abstraction in order to approximate dementia does not sound like a vote of confidence in, much less advocacy for, abstraction per se. But the careful modulations of form and the dreamlike evocation of space and movement Bailin achieves in the large, ambitious drawings comprising "The Erasing" share the quality of visual provocation evident in the work of the other six artists. Ambiguity lies at the core of abstract practice, and it does no less in Bailin's misty mysteries.

In 1963 influential critic and champion of abstraction Clement Greenberg organized a survey of American painting at the Jewish Museum in New York. It located a kind (or kinds) of non-objective work very different in most ways from the prevailing but waning Abstract Expressionist style. Greenberg called his exhibition "Toward a New Abstraction," refusing to declare thereby that the emerging practice had yet superseded the old, or that its earmarks, and its practitioners thereby, could be easily limned. The "Toward" in the title kept the new direction or directions not entirely distinct but brimming with potential. This New Abstraction, or the work of any artist included, could lead anywhere.

Similarly, a half century later, those artists who have grouped themselves under the rubric "21st Century Abstraction" have left open the exact, or even inexact, nature of what that abstraction is. They are, again, concerned not so much with what to do or how to do it, but why do it and where it stands in both current artistic discourse and recent art history. And in this moment of declaration they recognize that any prescriptive construction, any discussion that would direct practice, shrinks their mission. They leave themselves, one another, and their colleagues around the globe all the aesthetic room to do what they want and need in the studio. Instead, they address themselves outside the studio, to the larger art world and to the world at large. Why make abstract art now? Why make art now? How to be an artist now?

"Abstraction," it turns out, is an ethical and political as well as aesthetic stance; these artists, scattered across the United States and employing various styles that all happen to be identifiable as "abstract," are working towards an abstract life, not just an abstract art an abstract life because their artmaking to them symptomatizes larger ideas and commitments, and "towards" a 21st-century abstraction because the 21st century is itself barely two decades old, and already fraught with problems far more dire than who's doing what on canvas. The looming crises of our time can make art and artmaking seem irrelevant; but as a manifestation of human reflection, as well as of human ingenuity, art maintains its vitality, or at least its potential. Such potential supports abstraction as a viable modality. This group advances that modality as self-sustaining and exemplary. 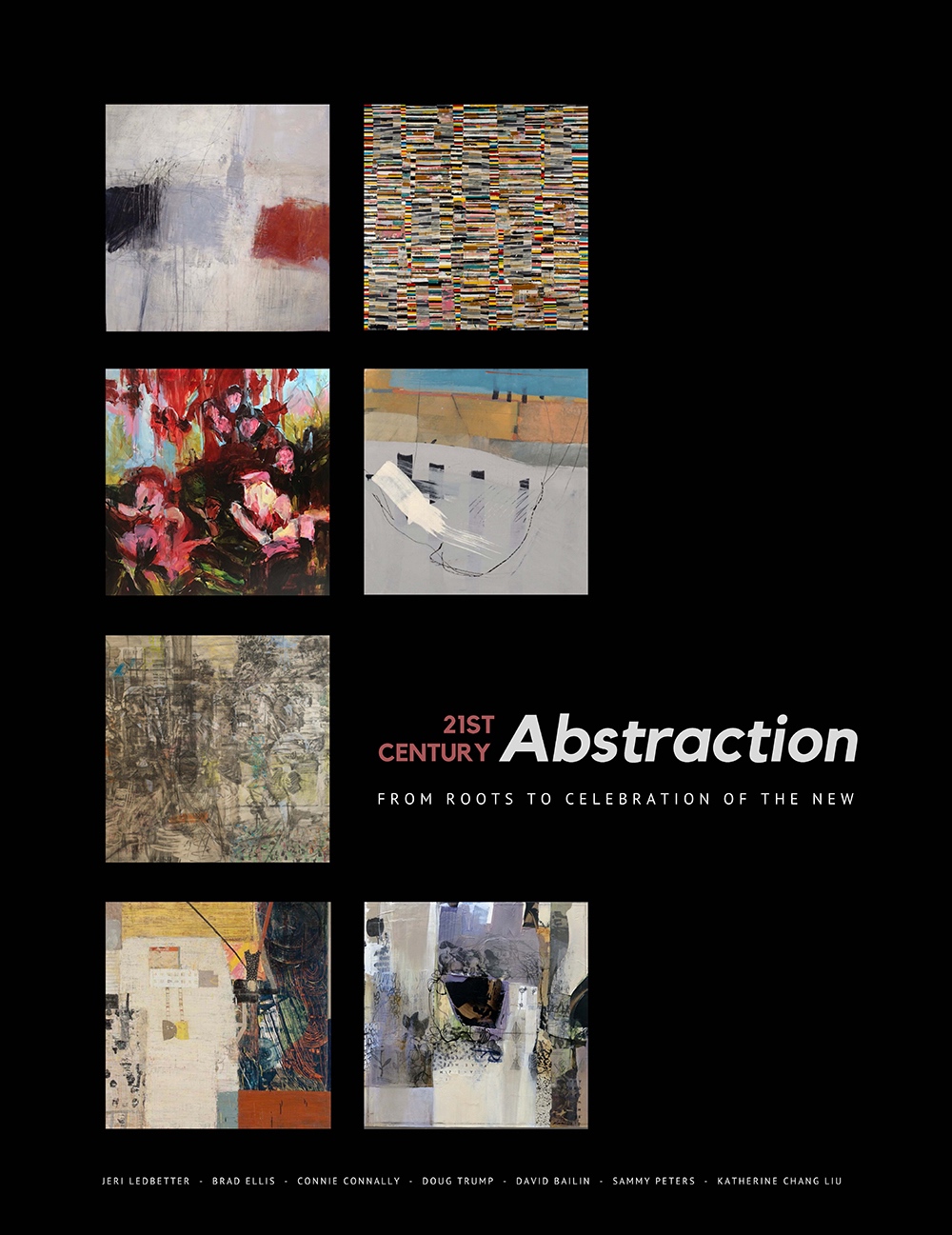