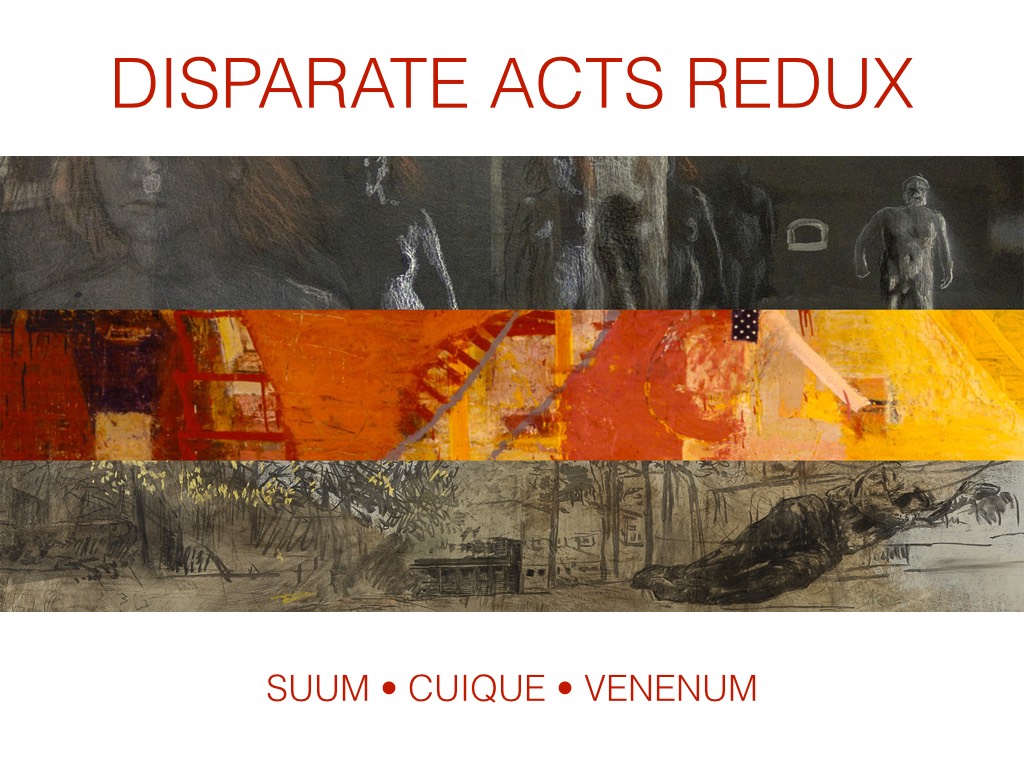 Click on the image above to open the PDF.

The following are my notes to the lecture given at the Legacies and Lunch Program, Darragh Center, Central Arkansas Library, Little Rock, AR on September 2, 2015. I hope to flesh out the ideas here at a later time.

Presentation
Thank you Colin and Kate. I am the third Bailin to present here. 4 years ago my 16 yo daughters, Sarah and Emma, presented their historical documentary, Return to Sender, in this very hall. I am proud to be following in their footsteps. Of course, they didn’t have Warren Criswell and Sammy Peters in the audience to face them at the next artist lunch.

After the talk, all three of us will be available to answer any questions so Warren and Sammy will have their chance to set the record straight and, for those of you who want, we’ll be available to walk through the exhibition at the Butler Center.

While preparing for this talk, I received all kinds of help from them in the way of suggested talking points, things to emphasize and things not to bring up. Warren, in fact, prepared a separate talk on the similarities and differences we have in our approach to our art (which, I have to admit, is quite good and I hope he publishes it on his site) just in case I leave anything out.

In fact his proposed talk was so good I decided a few days ago after I read it to throw out my prepared talk and start over. It was frustrating for sure but after nearly thirty years of high spirited conversation, arguments and disagreements with these guys, I was used to discarding not only my writing but many more drawings as a result.

Frankly, a talk solely on the timeline, reviewing the major shifts in our styles and approaches can really be left to art writers, the readers of our catalog and to Warren, himself. I prefer to focus on the one thing we three always concern ourselves with: The Studio. And by that I mean that activity we do when we are alone in our studios and face a blank canvas or piece of paper.

This solves two problems: 1. It opens up a curtain that neither Sammy, Warren or I have been privy to with the others and 2. Whatever is said about that practice has been documented by my daughters and I can’t be held responsible for what is said by the others.

We have been meeting weekly or bimonthly for nearly 30 yrs. and yet we rarely visit each others studio, (I think I’ve visited W’s four times and mostly to pick him or his art up or drop him off). We don't socialize outside of our lunches. But I consider those guys my closest and dearest friends.

What links us? What makes us look forward to an interruption in our precious studio time? Its more than a shared commitment to making art, to understanding why we do what we do. Cooped up in our studios for hours on end, there comes a point where we have to abreact - decompress. As loving and forgiving (and they have to be) as our wives are, no one but artists will stand for the constant and intense interrogation of our processes and obsessions.

To over simplify
click to Criswell bubble
For Warren his abreaction is toward the ambush of the image and towards the ambivalent, avenging and sociopathic muse.

click to Peters bubble
For Sammy it is creating through the haze of fumes that can lay to waste millions of brain cells and nerve endings within an extremely hot or extremely cold studio environment.

click to Bailin bubble
For me, the realization that my work moves in a slow and steady pace towards obliterating the very physical remains of my narratives in the drawn image.What this all comes down to is battling the pit. That is the release we seek in our company. The best way to explain the pit is to hear it from a master: Milton Resnick
Clip from A World of Art: Works in Progress: Part 7
Produced by Oregon Public Broadcasting in association with Oregon State University. 1997

PETERS
We’ll begin our ART SAFARI with Sammy Peters. I’ve selected him first because I’ve never heard him abreact. I’ve never heard him say a bad thing about any artist. He is the gentleman and scholar of our group. He rarely talks but when he does it strikes at the heart of the matter. I have been trying to write the definitive essay on him for at least three years. I just can’t do it. How do you describe art work so beautiful and sublime that it takes your breath away…that is so perfect that it draws you into it and you never want to leave it.

On Nature: His work deals with the edge.

He points out to the street to make a point about the intrusion of nature onto man. I see it every where now.

CRISWELL began as a photorealistic watercolorist.
As brush replaced typewriter, Criswell demanded more from his materials and from his working process than mindless photo duplication and drew inspiration and ideas from sketches - sketches drawn in the dark, inside strip clubs and on shoulders of highways at night. From the cool vision mediated through the lens of a photograph to the hot vision mediated through his flesh and blood, Criswell learned to see the world and discovered what he called the membrane (the interface between existence and essence, chaos and order, beauty and ugliness, humor and pain) and the anxiety of the creative act (those stunning moments where the image becomes the idea only to escape from grasp).

Criswell is an artist’s artist. Scarecrows, ravens, golems, myth and mysticism, the Doppelgänger, storms and seas litter his work as he plows through the topography of history, culture and the personal. He calls it his addiction - the need to create art to achieve an opening onto existence and the need to create again as a result of its closing. Art is dangerous, he says, because it penetrates our defenses against truth, and strips us bare, but mostly because the process flirts with death. The multiple styles and techniques he employs in producing his art, the almost frantic attempts at solidifying (finish, lay to rest) an idea or vision, the constant struggle to balance the literary with the visual, the theme with its rendering, and to reconcile consciousness and grace, idea and image, objective analysis and subjective action, are obvious in every drawing, painting, and sculpture he creates.

The Punishment, 2007
Criswell: The artist in his studio. He has either passed out (from wine) or is dead (from pills) or is just pretending to be. Other versions of him are working on a painting on the easel behind him, a painting of himself pretending to be Tityus in Michelangelo's drawing "The Punishment of Tityus," portraying the son of Gaia having his liver eaten nightly by vultures (in this case crows) for his attempt to fuck a forbidden goddess. The crows fly out of the painting, into the studio. A golden spiral can be traced from the artist's ear, through the chair back, his hand, the wine glass, the sketch pads, the pond out the back door, the moon, Venus, up to the fluorescent tubes overhead.
Cut to Black, 2007
Criswell: These are the props I used for The Punishment, in random disarray on the card table. I was ambushed by them when I walked into the studio one night. I set up a small easel and painted exactly what I saw on the table, without moving anything, as with all of my still-lifes. If I move anything I lose it. On the yellow pad on top is a sketch for the guy slumped on the table, and the pad underneath is a storyboard for an animation, under the last frame of which is written "END--crow fills screen--cut to black." I was thinking of the end of the last episode of The Sopranos.
I saw a Fibonacci sequence happening with these two painting (which I think should be a diptych). One in which the sequence (or muse?) moves from the artist into the world and the other sequence moving inward to the mind and psyche of the artist. [expand later]

Flash Flood, 2002
Criswell: A guilty looking naked guy clutching a Superman suit is caught in the headlights during a storm on a flooding I-30 exit ramp. (In an earlier version I painted myself as Superman flying but it didn't work and this was the result. In my version of this talk I pointed out that back in the day both you - as in "Salt" and "Moses and Aaron" and I - as in "The Pool" and "Backstage" - were able to defy gravity, but that we subsequently lost that ability, like Icarus.)

The Question, 1991
Criswell: The Grand Inquisitor interrogates his naked double. An egg has been broken and its double yolk is glowing in the glass. A list of the prisoner's offenses is on the table.

Eldorado, 2013
Criswell: Obviously inspired by Poe's eponymous poem, the knight with his broken lance, is mounted on an ostrich under the ruins of an I-30 overpass, silhouetted against a huge full moon. (I had to do that in order to make the knight visible. The knight-in-the-night problem.) The shadow, his double, is pointing at this moon, obviously speaking the last lines of the poem:

‘Over the Mountains
Of the Moon,
Down the Valley of the Shadow,
Ride, boldly ride,’
The shade replied,—
‘If you seek for Eldorado!’

The Muse as Psychopath.

My Process from thumbnail

to translation into a drawing

Then, if the hook doesn’t hold my attention, destroyed and redrawn.

Even destroying drawings does not the idea. Here the idea of undressing and jumping out a window comes back five years later.

The picture I drew on the wall becomes a thumbnail for not only thew next drawing but a whole new series.

Now the man is in full flight. The difference between Criswell and me—I keep my clothes on.

This is why we lunch together. So that our visions of the future can be made a little less spurious.

Lecture © David Bailin | Bailin Studio
Click here to view the catalog for the exhibition.
Return to the Presentation Page
Selected Works Available • Catalogs Available • Contact Page • About Me
Looking for something? Search the BailinStudio Site